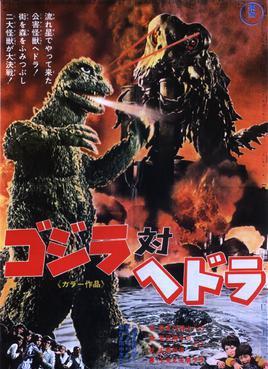 "Godzilla vs. The Smog Monster, also known as Godzilla vs. Hedorah, follows in the line of Godzilla's Revenge, targeting it towards kids. Little kids. Little kids who get hopped up on sugar to the point that their brains operate on higher levels of existence and their super-sensory nerves subject them to a fantasy world that exceeds that of an adult on the most powerful narcotics known to science! Basically, I'm just trying to say this movie's really weird.... This movie's a mixture of horror, children's movie, '70s psychedelic exploitation, and... Godzilla."
—James Rolfe, Cinemassacre's Monster Madness
Advertisement:

Number 11 in the Godzilla series, Godzilla vs. Hedorah (Gojira tai Hedora), also known as Godzilla vs. the Smog Monster is one of the more surreal entries in the series.

Rampant pollution off the coast of Japan, combined with a mysterious lifeform that came on a meteorite, has created a monstrous pile of pollution. A researcher, Dr. Yano and his young son Ken are stricken by the creature's poisons upon discovering the creature, who begins making trouble on Japan's coast. The creature is named "Hedorah", after hedoro, the Japanese word for sludge. Ken keeps receiving visions that Godzilla has decided to take the matter in his own hands and is making his way to fight the creature. Though beaten back into the sea on their first encounter, Hedorah quickly adapts and grows in power, choking the streets with his creeping sludge and skeletonizing people where they stand with toxic gases left in his flying wake, and he even brings Godzilla to his knees. With the situation looking dire, a group of teenage hippies plan one final celebration of life on the slopes of Mount Fuji and Dr. Yano manages to find a weakness in Hedorah. Using giant electrodes, the creature can be killed by drying out. Though Hedorah manages to interfere with the power, Godzilla arrives to power them on with his atomic breath and fights harder to make sure Hedorah is Killed Off for Real even resorting to flying in pursuit using his atomic breath.

Followed by Godzilla vs. Gigan.

On November 3rd, 2021 a short film of the same name saw a rematch between the two monsters using suits from Godzilla: Final Wars for Godzilla’s 67th anniversary.