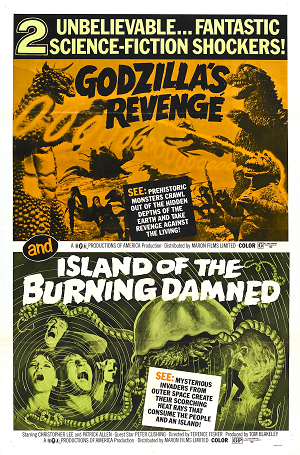 Many years ago, when movies were shown in theatres typically two films were featured at a time. In some cases, they didn't even bother chasing people out when they were over; you could sit in the theatre all day if you wanted. (In places where it was very hot and homes didn't have air conditioning but the theatre did, sometimes that's what a lot of people did!)

For your money, starting at a nickel or a dime in the 1930s, a typical night at the movies would consist of:

The traditional double feature format began to fade with the Fall of the Studio System, which ended the practice of studios owning theater chains and directly booking their films. The rise of television meant more money was poured into larger-scale productions that could stand on their own, with some would-be Epic Movies intended to be treated more akin to live theater performances with intermissions, programs, and the like (this was known as a Roadshow Theatrical Release). Theatrical shorts, both live-action and animated, slowly faded away in the 1960s. While second-run theaters, grindhouses, and drive-ins continued to present double-bills of B-pictures and older films by choice, by the 1970s no respectable A-list film would be treated in such a matter.

The killing blow was the multiplex theater setup taking off at the turn of the 1980s. With multiple screens in a complex, every movie was now treated as being able to stand on its own. Still, occasionally a major studio might offer up a double feature of films that had completed their original runs. Into the early 1980s, Disney often did this, or alternatively teamed up an old movie with their newest release. (The last time they did this in the United States was in 1997, when for one weekend they offered a Hercules / George of the Jungle double bill.) 20th Century Fox was known to soothe its money woes in the 1970s with marathon runs of the original Planet of the Apes films. For Halloween weekend 1986, they offered a double feature of Aliens and The Fly (1986).

Nowadays, for $7 to $15 you typically get one movie, about 20 minutes of advertisements (for anything from local lawyers to recommendations to enlist in the National Guard) and trailers for other films, a "No Talking or Phones" Warning, and ads for all of the overpriced stuff that the theater tries to sell you. And occasionally an animated short. The only places left that might offer more than one film for your ticket purchase are Drive-in Theatres and specialty cinemas (and this is becoming rarer due to Disney's acquisition of 20th Century Fox's film library, which resulted in many classic films that were popular for use in such theaters being placed in the Disney vault in North America).