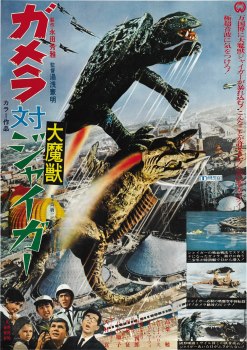 When an ancient, and rather large, idol, called the Devil's Whistle is removed from its resting place on Wester Island, the monster Jiger emerges from her slumber and is soon attacked by Gamera...for relatively unknown reasons, to be perfectly honest. After defeating Gamera, Jiger makes her way to Osaka, Japan, where the idol is being held at the World Expo. Jiger destroys everything in her path, both before and after arriving in Osaka, until Gamera returns for a rematch. Gamera is once again defeated when Jiger injects him, via her barbed tail, with an embryo of hers. Gamera soon falls into the bay unconscious, and it is up to two young boys to take a small submersible into Gamera's body and destroy the embryo, in the first onscreen act of abortion ever seen in a giant monster movie. After discovering that the baby Jiger has a weakness to radio waves, it is discovered that the idol, which the adult Jiger has finally reached and has buried under tons of rubble, is hollow and channels air and wind through it at a frequency that harms Jiger. After Gamera has been revived, he battles Jiger a third time. This time, however, Gamera is wise to Jiger's tricks and soon defeats her when he stabs her in the head with the idol. The movie ends after Gamera flies away.

Gamera vs. Jiger, when compared to the other films after Gamera vs. Gyaos, is actually one of the more mature films in the Showa Gamera series. Its child protagonists are almost teenagers, and thus older than every other child seen in a Showa Gamera movie, and they aren't annoying either...well, they're nowhere near as life-threateningly stupid as the boys from Gamera vs. Viras and Gamera vs. Guiron, or as annoying as the children from Gamera vs. Zigra, and they prove to actually be helpful, for a change. Overall, Gamera vs. Jiger is an underrated entry in the series that deserves more attention.