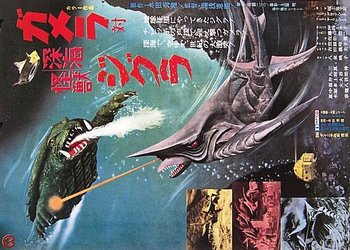 The seventh installment of the Showa-era Gamera films. Earth is invaded by inhabitants of the planet Zigra, a water breathing race that wants to use humankind as a food source. It’s up to Gamera and a handful of children in the thick of it to save the day. Daiei Studios filed for bankruptcy shortly after the release of this film, leading to a nine-year hiatus until the eighth and final Showa Gamera film was released.

This is one of nine films to be used twice on Mystery Science Theater 3000 – once on the local Minneapolis UHF station KTMA in 1988 during the local run of the show and later when running nationally on Comedy Central. For those versions please go to the episode recap page.