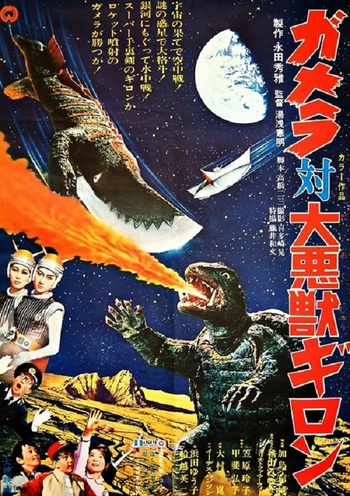 "I'll bet it's a world without wars or traffic accidents!"
—Tom and Akio at various points in the film.
Advertisement:

The fifth installment of the Showa-era Gamera films, released in 1969. Following in the footsteps of Gamera vs. Gyaos and especially Gamera vs. Viras, Guiron turns the kid-friendly elements Up to Eleven; in this film, for instance, the actual protagonists are children, as in the preceding Viras. The official American release of the film, from American International Pictures, retitles the film Attack of the Monsters; a different dub later used by US TV Producer Sandy Frank re-instated the "Gamera Vs X" title.

Akio, his little sister Tomoko, and their American friend Tom spy a spaceship landing in a nearby field. Akio and Tom are investigating the ship when it suddenly launches, taking them with it and leaving Tomoko behind. As they leave the Earth's atmosphere, the children spot Gamera apparently coming to try to rescue them; however, the ship is too fast, and Gamera is quickly left behind (he does manage to protect them from an Asteroid Thicket, though).

The spaceship takes them to a planet called "Tera", on the opposite side of the sun from Earth. Upon arrival, the boys are menaced by a silver replica of Gamera's old foe Gyaos; but the monster's attention is soon attracted by another monster — a dog-lizard whose forehead is one giant, protruding knife blade. The Gyaos is defeated by being chopped up into pieces, and the boys take shelter inside an underground complex. They meet two women, Barbella and Florbella, the only surviving members of their race, who explain to them that Tera has been all but wiped out by the "Space" Gyaos and that "Guiron" (the knife-headed dog lizard) is their only defense.

Although they seem nice, the alien girls are actually plotting to put the boys into comas in order to eat their brains. However, probing Akio's mind, they learn about Gamera — who soon arrives. The aliens release Guiron, who manages to stun Gamera and trap him at the bottom of a lake. Meanwhile, the boys wake up, realize the aliens' evil intentions, and try to flee — only to accidentally release Guiron in the process. Now completely out of control, Guiron attacks the spaceship as the aliens try to fly away, then begins coming after the children. However, Gamera returns and fights Guiron to a standstill; the boys pitch in, somehow managing to fire a missile into Guiron's head, which Gamera ignites with his flame breath, destroying the monster. Gamera uses his fire breath to repair the spaceship and carries the boys home in it, where their families and friends (and lots of military and scientists) are waiting for them (Tomoko's character arc for the entire film is trying to convince the adults of what happened to the boys).

Alternative Title(s): Attack Of The Monsters