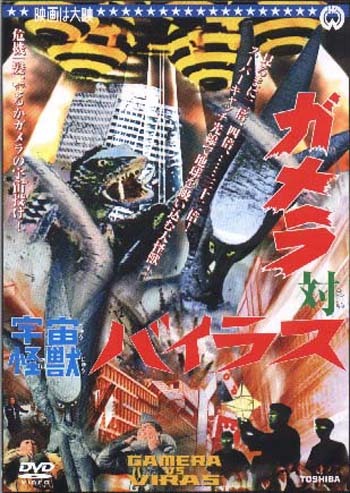 Gamera vs. Viras is the movie where Gamera's love for children became the main plot point. It features stock footage from Giant Monster Gamera, Gamera vs. Barugon, and Gamera vs. Gyaos. Aliens from outer space arrive on Earth and kidnap two young boys, who both put themselves and others in harm's way on more than one occasion by screwing around with an experimental submersible (and trying to have an underwater race with Gamera). The aliens soon learn about Gamera by probing the boys' minds, and much stock footage ensues. The aliens then take control of Gamera and more stock footage ensues. The boys plead with the military to not care about their own lives (in rather noble moment of self-sacrifice) and to destroy the aliens' ship. Gamera is soon freed from his mind control when the boys screw around with the alien ship's controls, and the ship is destroyed after they escape. The surviving aliens then merge into one giant monster, called Viras, who engages Gamera in a duel to the death. Gamera wins after freezing Viras in the atmosphere.