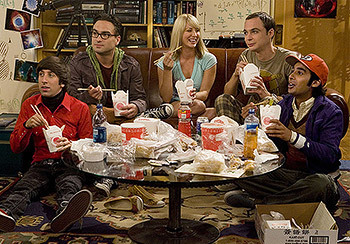 And she's a Jack-of-All-Stats, too.
"No one can be that attractive and this skilled at a video game!"
— Sheldon Cooper, The Big Bang Theory
Advertisement:

You are one of Two Gamers on a Couch, enthralled by the latest noisy console game. As you furiously punish the controller old potato chips fly from your shirt, illuminated briefly by the glow of the screen before disappearing into the darkness of the room around you. You feel the sweet victory over your rival drawing near. As you are about to deliver the final blow, a mysterious figure steps between you and the television. Who could it be? Oh, it's just your extremely hot female roommate trying to get you to do something other than play video games. Whatever, you will unpause the game after you pretend to listen to what she says.

This girl is the Nerd Nanny, and how she winds up living with a bunch of lazy guys is a mystery. Even more amazing is the fact that the guys never seem to notice how frickin hot she is, unless some story-driving UST is needed. She is constantly trying to motivate the Non Action Guys to do anything, sometimes even to pay attention to her, but they usually won't have any of it. Fortunately for our male castmembers, she almost never leaves them for a different housing situation, because if she did — well, who would want to watch a show without hot chicks in it? Am I Right??

As this is Truth in Television to a large degree, there are reasons why women find themselves in this situation: or even actively seek it out. The sisters of gamers, will often find themselves playing this role (or live-in aunts, cousins, extraneous other relatives). They stick around, because well...it's her house too. The woman in question may be some type of nerd herself and have interests in some of the same franchises the guys do: even if she's maybe not as into the gaming side of things. Maybe she's a Hot Librarian, or writes fanfiction, or an avid Cosplayer. In which case, the company of people who get her references is preferable to the company of those who don't: even if some of them are little difficult at times. Of course it is also possible that the deadbeat guys DO have interesting personalities and are merely too awkward to express themselves in the company of most others (particularly people they find attractive: which might not include women). For particularly attractive women, being ignored by the men in her house may be preferable to the alternative. Especially in their teenage years, a lot of particularly attractive women are constantly harassed by most men AND rejected by most fellow women because of the attention that men pay them. This tends to go away as the women enter their 20s. This woman may have genuine reasons to like these guys, even if they don't willingly do household chores. It helps if the guys have jobs of some sort. Note also that this sort of behavior is perfectly fine when it's an occasional thing: maybe when a new installment of his favorite franchise drops, or during a particularly exciting boss fight. It's only a problem if the behavior becomes constant. In real life, that's called video game addiction, and there is therapy for it.

Note the guys don't always have to be nerds. Any reason to be couch-ridden also works (e.g. drugs, laziness, etc.).

This character is popular in webcomics and sitcoms, but is present in other genres as well. The Smurfette Principle is also a driving factor.