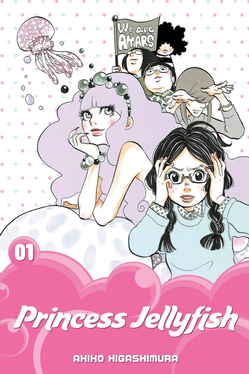 Princess Jellyfish (Kuragehime) is an award-winning josei manga by Akiko Higashimura, which was serialized in Kiss from 2008 to 2017. The manga was adapted to anime by Brains Base as part of the noitaminA block, where it aired from October 15 to December 31, 2010. Funimation simulcasted the series on their video portal

and later released it as a box set.

Tsukimi, an extremely shy and self-deprecating 18-year-old illustrator, has been fascinated by jellyfish ever since her now-deceased mother took her to an aquarium when she was young. To her, they're everything she isn't- beautiful and graceful. While jellyfish-watching at a pet shop, she sees a spotted jellyfish in the same tank as a moon jellyfish, a death sentence for the former. Overcoming her fear of stylish people (and men), she tries to talk the clerk into moving the spotted jellyfish to another tank. Apathetic to the plight of this nerdy girl, the clerk just ignores her and Tsukimi gets into a fight with him over it. Things are looking bleak for Clara (the spotted jellyfish) when a fashionable girl intervenes and talks the clerk into giving them the jellyfish.

The mysterious "princess" follows Tsukimi back to the "Nunnery", the boarding house she shares with a bunch of fellow nerdy otaku girls, and ends up sleeping in Tsukimi's room. This dreamy girl, however, is not all that she appears...

A Live-Action Film Adaptation was released in 2014, starring Masaki Suda of Kamen Rider Double fame as Kuranosuke, and Rena Nonen as Tsukimi. A live drama version started airing in January of 2018, running for ten episodes.

A Character Page is now in the works!