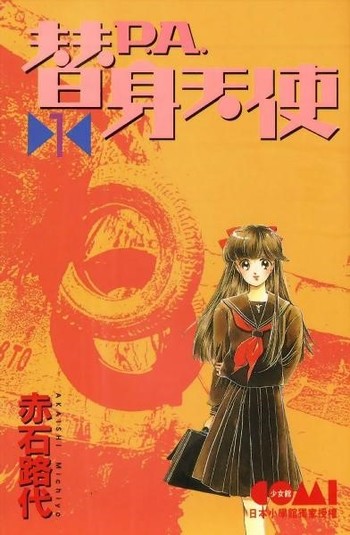 "I am a Private Actress. As long as someone is willing to pay for it, I can play any role."
Advertisement:

Private Actress is a manga by Michiyo Akaishi, author of Towa Kamo Shirenai, among other titles. It had 31 chapters and was released in eight tomes. There's also Private Actress Tokubetsu-hen, a one-volume sequel.

Shiho Kobayakawa is the most popular girl at her school. She's pretty, polite, softspoken, booksmart... almost the spitting image of the Yamato Nadeshiko aka ideal Japanese woman. What her classmates don't know, however, is that Shiho has two part-time jobs to pay for her expenses and education. The first is as a simple movie extra... but the second is one as a private actress, meaning an actor and stand-in who is hired for personal purposes rather than fame. For example, if a young man needs someone to pretend to be his girlfriend so their family will stop nagging him about lack of commitment to relationships, he can go to Shiho's agency and hire her to pose as his girlfriend for some time, which she will do for as long as it's needed and the requester can pay her.

The manga itself dwells on Shiho's life and work, showing us some of the reasons and circumstances that would lead people to hire an actor. It also slowly shows us Shiho's real life, and the reasons why a girl like her would rather pose as a PA than going into stardom despite having both looks and talent to do so...

Private Actress has the following tropes