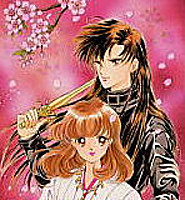 A Miko and her bodyguard. Sorta.
Advertisement:

Towa Kamo Shirenai ("Maybe Forever") is a shoujo manga by Michiyo Akaishi, which was serialized in Shogakukan's Cheese! magazine from 1997 to 2000 and compiled into eight volumes.

Kosumo Koganehara is a young girl with the bad luck of being both extremely ill and having a very rare blood type. Because of that, the poor kid has lived her life going from hospital to hospital, and lately she's had to go to the USA for treatment. While writing a letter, Kosumo has an horrifying seizure and must be operated, but no one can find a donor.

Few blocks away from the clinic, a Japanese girl named Himiko tries to save a child from being hit by a truck and ends up being run over. She's rushed to the same clinic, but her injuries are so serious that she just won't make it. The doctors try to save her but fail, and then they realize that they can save Kosumo by donating Himiko's blood and heart to her. They ask her guardian and companion, Hitsuji, if he would allow them to do so, and he accepts.

While Himiko dies, Kosumo is saved, and everything seems to be all right. Not only that, but soon Kosumo now more or less healthy and can come back home. However, she starts noticing that things aren't the same anymore... Demons! There are many devils targeting her and others! Why?

The explanation is simple. Himiko wasn't a normal young woman, but a Miko and Magical Girl Warrior coming from a powerful clan. When her organs and blood were given to Kosumo, then, she inherited her powers and mission. And now Kosumo has to come to terms with it, with Hitsuji's own opinions about he deal, and the terrible dangers coming from being the heiress of the 99-th Miko, destined to save Japan from destruction by demons.