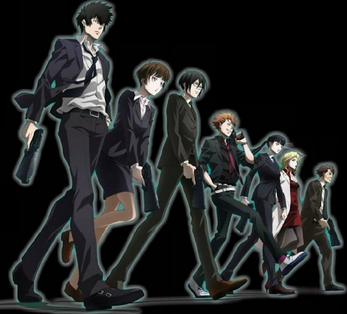 Checking out at the Psycho-pass: Kougami, Akane, Ginoza, Kagari, Kunizuka, Shion and Masaoka.
"This is a world where the mental state and personal tendencies of a human can be quantified. While all sorts of inclinations are recorded and policed, these measured numbers used to judge peoples' souls are often called 'Psycho-Pass'".
Advertisement:

In the 22nd century, Japan is tightly governed by the Sibyl System and their enforcers, the Public Safety Bureau. The Sibyl System maintains order by using advanced technology to instantaneously analyse a person's psychological profile and calculate the likelihood that person will commit a crime. Factors such as emotional state, mental health, stress levels and criminal desire are quantified into a single number known as a "Psycho-Pass"; if this number exceeds an acceptable threshold, the target is judged a threat and sentenced to mandatory therapy. In the most extreme cases, where the Psycho-Pass is so high that rehabilitation is deemed impossible, the Sibyl System orders immediate execution.

Hunting down those deemed a threat to society is the aforementioned Public Safety Bureau, which operates through teams of two detective types: Enforcers, latent criminals whose Psycho-Pass has exceeded the acceptable level but who are called on to assist; and Inspectors, who supervise the Enforcers to make sure they follow procedure and don't escape. Called in on difficult and extreme cases, Bureau officers are equipped with Dominators, which allow the wielder to scan a target's Psycho-Pass and, if authorized, fire non-lethal or lethal rounds depending on the reading. Of course, being a social science-fiction plot, a central theme is whether or not the Sibyl System and the Bureau are worth their cost.

Psycho-Pass is a Post-Cyberpunk anime series created & written by Gen Urobuchi of Puella Magi Madoka Magica and Fate/Zero fame, with character designs by Akira Amano, the mangaka behind Reborn! (2004), and animated by Production I.G. The series was picked up for simulcasting by Funimation. Shortly after the anime's premiere, a manga adaptation titled Inspector Akane Tsunemori began serialization in Shueisha's Jump Square. It was also adapted into a two-volume novel. Psycho-Pass is widely considered to be the anime equivalent of Minority Report, which also deals with the concept of arresting criminals before they even commit a crime based on the analysis of a central computer system.

Psycho-Pass opens in 2112 as idealistic rookie Inspector Akane Tsunemori begins her first assignment to the Public Safety Bureau. Along with her fellow Inspector Nobuchika Ginoza, she is set to supervise the Enforcers of Division 1: Shinya Kougami, a former Inspector turned Enforcer; Tomomi Masaoka, a veteran Enforcer with deep knowledge of the Sibyl System; Shusei Kagari, a flirtatious man identified as a latent criminal at age 5; and Yayoi Kunizuka, a stoic woman of few words. Following a string of suspicious crimes and unsolved cases all leading back to the name Makishima, it's up to Akane and the Bureau to solve the conspiracy threatening society itself. The series premiered in Fall 2012 on Fuji TV's noitaminA block.

As preparation for the second season, a rebroadcast of the first season titled Psycho-Pass New Edit aired in the Summer 2014 Anime season, with the episodes edited into 11 one-hour long broadcasts. In addition, the New Edit adds additional footage at the beginning of each episode as well as halfway through (serving as a kind of transition scene between the two original episodes it is combining together). In total, the New Edit adds almost 35 minutes of new footage to the series.

Psycho-Pass 2 begins one and a half years later, and follows the new Division One. Built up of both returning members and a few replacements, the team is joined by: Sho Hinakawa, an introverted geek and former hologram specialist; Mika Shimotsuki, a by-the-book detective who clashes with Akane's unique thinking; Sakuya Togane, a mysterious and shifty Cowboy Cop-type; and Joji Saiga, who returns to actively consult at Akane's request. When an Inspector goes missing and an Enforcer is killed following an incident, Akane leads the unit in fighting a series of terrorist attacks through the city, connected only by the attackers mentioning "Kamui" and his mysterious "WC?" graffiti. The second season aired in the Fall 2014 Anime season.

Psycho-Pass: Sinners of the System (or more simply, Psycho-Pass SS) was announced as a movie trilogy continuation of the franchise and premiered in January through March 2019. Each movie focuses on certain characters: Case 1 - Crime and Punishment (Mika Shimotsuki and Nobuchika Ginoza), Case 2 - First Guardian (Tomomi Masaoka and Teppei Sugo) and Case 3 - Beyond Love and Hate (Shinya Kougami). First Guardian was also the final film appearance of Kinryū Arimoto as the voice of Tomomi Masaoka before he died in February 2019.

Psycho-Pass 3 premiered on October 24, 2019 on Amazon Prime Video. Introducing two new Inspectors, former political scion Arata Shindou and Russian immigrant Kei Mikhail Ignatov, the story takes place three years after the Sinners of the System movies and concerns a conspiracy called "Bifrost" that is secretly manipulating the economics and politics of Japan without Sibyl's knowledge. Meanwhile, several of the former Division 1 members have been recruited into the Ministry of Foreign Affairs' Special Action Division, while Sibyl has imprisoned Akane Tsunemori in an isolation cell for classified reasons. Tow Ubukata is in charge of series composition while Ryo Yoshikami and Makoto Fukami, who also wrote the SS movie trilogy, are in charge of the scripts. Light novel & manga adaptations

are also included as part of the season, written by Yoshikami and illustrated by Akira Amano.

After the conclusion of the third season, a movie sequel, Psycho-Pass 3: First Inspector, was announced. It was simultaneously released on March 27th, 2020 in Japanese theaters and worldwide on Amazon Prime Video (which is divided into three 45-minute episodes, making it 3 additional episodes for Season 3), and it immediately picks up right where Season 3 left off.

In celebration of the 10th anniversary of the franchise, a movie entitled Psycho-Pass PROVIDENCE was announced

. No release date has been announced yet.

Other additional materials related to the franchise include:

open/close all folders
#A-F
G-L
M-R
S-Z
"I have detected that you are experiencing a great deal of stress. We recommend that you log off TV Tropes and seek mental care immediately."
Feedback

Should a person's Crime Coefficient exceed 300, the Dominator enters Lethal Eliminator mode, and when fired at that person, results in them being turned into red mist.

Example of:
Cruel and Unusual Death

Should a person's Crime Coefficient exceed 300, the Dominator enters Lethal Eliminator mode, and when fired at that person, results in them being turned into red mist.