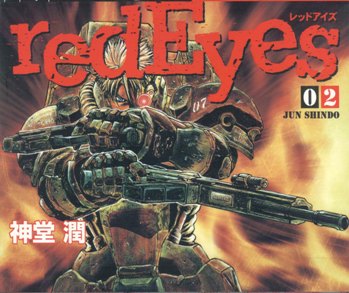 Graham "Genocide" Mills was once the finest soldier in the Regium Republic military, respected by his peers and feared by his enemies. But when the war with the neighboring country of the Dragonov Federation ends with defeat, Mills is betrayed and sent to prison to await execution. But when he escapes, he's immediately found to be the most dangerous man alive, with or without his Special Assault Armor. Now, on the run from the military in both Regium and the Federation, Mills sets out to find the truth behind his unit's betrayal, the reasons for the war, and his own revenge against those who wronged him.
Advertisement:

Drawn and Written by Jun Shindo, Red Eyes started in 1999 at Magazine E-No from publisher Kodansha, later it got transfered to Magazine Great, this series is part of their Monthly Shonen Magazine Comics line (yes, despite what the content might make you think otherwise, this is not a Seinen series).

If you're looking for the trope of red-eyed characters, head on over to Red Eyes, Take Warning.