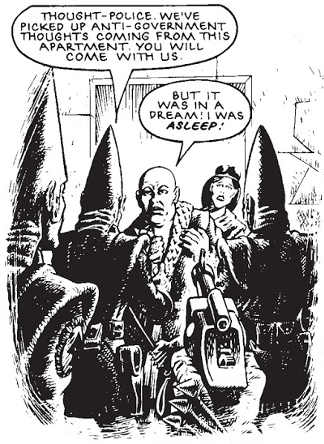 Not good enough. Off to the vaporization vats with you!
"He could not help feeling a twinge of panic. It was absurd, since the writing of those particular words was not more dangerous than the initial act of opening the diary, but for a moment he was tempted to tear out the spoiled pages and abandon the enterprise altogether.
He did not do so, however, because he knew that it was useless. Whether he wrote DOWN WITH BIG BROTHER, or whether he refrained from writing it, made no difference. Whether he went on with the diary, or whether he did not go on with it, made no difference. The Thought Police would get him just the same. He had committed — would still have committed, even if he had never set pen to paper — the essential crime that contained all others in itself. Thoughtcrime, they called it. Thoughtcrime was not a thing that could be concealed forever. You might dodge successfully for a while, even for years, but sooner or later they were bound to get you."
— Winston, 1984, Part 1, Chapter 1
Advertisement:

How the Appeal to Force and the Ad Hominem are codified into law.

Whenever a dystopian, totalitarian government tries to control the speech and actions of its citizens, it'll label dissent and criticism as Thoughtcrime, and quell Thoughtcrime, by every means possible. The clever trick here, since in most stories the government has no access to these thoughts, is that it trains the oppressed to oppress themselves via internalizing what is seen as disapproved thought. As well, propaganda exhorts people to turn in their friends and family.

If a reason is ever given at all, apart from the obvious, Thoughtcrime can be explained as "intrusive thoughts," and their repression leads to "a happier society".

It is nearly impossible to remove Thoughtcrime policies once enacted. The definition tends to expand until whistleblowing is illegal—after all, only a communist/fascist/atheist/religious fanatic etc. would be deceptive enough to claim that our glorious and beneficent regime could possibly make errors, suffer from wishful thinking, or be corrupt.

Of course, by inherent nature, trying to not think what they forbid you to think about will always fail - and expect one or two citizens to be trapped by this thought process and then get captured by the Secret Police (or worse) for their "trouble". Taken to extremes, this may lead to everyone getting punished. Punishment includes hard labor in a prison camp, torture up to the point of a forced confession and a Kangaroo Court show trial, and execution.

Naturally, when no one is allowed to guard the guards, the guards abuse their power left, right and center. Add to that the fact that no person is capable of getting everything right, and even the best-intentioned crimethink laws end up convincing people that their purpose is to keep the masses from knowing too much.

Overlaps with Culture Police. Compare with The Heretic, for a religious equivalent. Related to The Evils of Free Will. In more nuanced stories, some of these guys sincerely believe they're using Brainwashing for the Greater Good. For others, it's just business as usual. As a means of propaganda, if the methods combating Thoughtcrime are known to the public, the government (or their corporate benefactors) might attempt to paint it in a lighter vein by calling them Enhanced Interrogation Techniques.