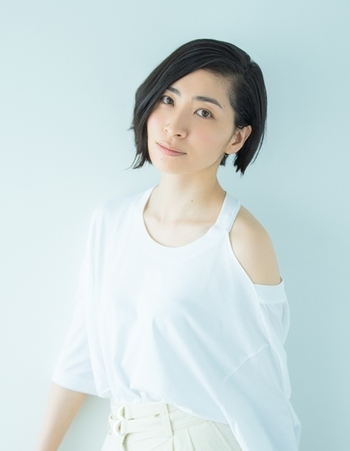 My page is yours, omae-sama.
Hear ye! Great seiyuus gathering before me! We are co-workers so we must work together as one! My name is Maaya Sakamoto, and in the Lord's name I shall serve as your s-s-s-- Sorry! I was so moved by my own lines! They're so cool...! Know what else is cool? The description of Maaya Sakamoto below.
Advertisement:

Maaya Sakamoto (born March 31, 1980) is a Japanese voice actress who, depending on the generation of media fan you talk to, may be better known for her singing career than her acting resume, even though her debut/big break was voicing Hitomi Kanzaki in The Vision of Escaflowne. Which was, well, a bit of beginner's luck: she was only supposed to voice Hitomi, but Yoko Kanno suggested that they have her sing the opening song and a few other pieces in the show, and it all took off from there.

Sakamoto has many collaborations with the aforementioned Yoko Kanno and CLAMP. Her star as an actress rose ever higher throughout the new century, even landing her parts in stage plays, including a multi-year run as Eponine in the Japanese production of Les Misérables and the leading role of Jerusha in the 2012 musical version of Daddy-Long-Legs. She is also a longtime collaborator with Nasu Kinoko and has multiple major roles in many Type-Moon works (most notably, the lead of Kara no Kyoukai, Shiki Ryougi, as well as Jeanne d'Arc in Fate works, which is particularly relevant with the ascent of Fate/Grand Order). Sakamoto in fact credits the role of Shiki with inspiring her own exploration of her gender. Additionally, she often dubs over Natalie Portman. By 2020, there was pretty much no question that she was one of the most accomplished actresses Japan knew in the 21st century, and was well on the way to being one of the great renaissance women of modern Japanese media & performing arts.

She has done several of her roles alongside Mamoru Miyano, Akira Ishida, and Kenichi Suzumura and in fact married Suzumura on August 8, 2011. She announced her pregnancy in December 2021.

She speaks Japanese and English at a conversational level, which comes up in the occasional acting role or song lyric.

Ageless vampire trapped in a child body, handsome schoolgirl, lady-like Earl or multiple-personality woman,... as long as this role needs a voice, I can nail it!

Some of her more notable musical efforts include:

Wouldn't my life be ruined if I read these too much? In that case I think I'll go back to The Other Wiki...
Eh!? But sometimes your life gets enhanced instead! Wait! Waaaait--Huh? That dream again...?