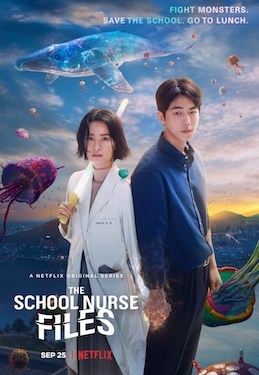 Fight Monsters, Save the School, Go to Lunch
The School Nurse Files is a 2020 Urban Fantasy Netflix original series starring Jung Yu-mi and Nam Joo-hyuk. This series is based on the novel by Chung Serang, and directed by Lee Kyoung-mi.
Advertisement:

Ahn Eun-young (Jung Yu-mi, Maaya Sakamoto in the Japanese dub) is a school nurse who can see fantastic beings called "jellies". Some of these jellies are benign, but others are not. Eun-young must protect her students from the harmful jellies, by killing them with a plastic toy sword and a BB gun. She is joined by the classical Chinese teacher, Hong In-pyo (Nam Joo-hyuk, Greg Chun in the English dub), who has a force field around him that protects him from the jellies and radiates magical energy.

You can watch it on Netflix here