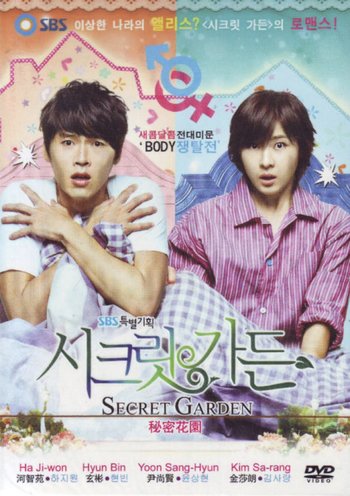 Secret Garden is a Korean Drama that aired in late 2010 on the SBS network.

Joo Won (Hyun Bin) is the CEO of a department store chain. He's young, handsome, rich, and super arrogant. As the story opens, Joo Won is trying to renew the services of his cousin, Korean pop star Oska, as spokesman for the department store. Oska needs a favor: his ex-girlfriend, actress Chae Rin, has embarrassing photos of him that she is threatening to publish.

So Joo Won sets off to talk Chae Rin out of publishing the photos. He goes to a film set and meets a woman that he thinks is Chae Rin. In fact she's actually Ra Im, Chae Rin's stunt double. Ra Im is a hard-working stunt woman who wants to get ahead. Naturally, the Meet Cute leads to the two of them falling in love.

And then there's a "Freaky Friday" Flip.

Since it's a Korean Drama there are numerous characters. Yoon Seul is a cool, refined woman who directs music videos. She's been matched up with Joo Won by their respective parents, and although she doesn't like him very much she does like the idea of being the wife of a successful business magnate. She also happens to be the old girlfriend of Joo Won's cousin Oska. Also in the cast is Jong Soo, director of the action school where Ra Im works. He's head over heels in love with her, although she doesn't know it.

Not to be confused with the movies adapted from the book The Secret Garden.