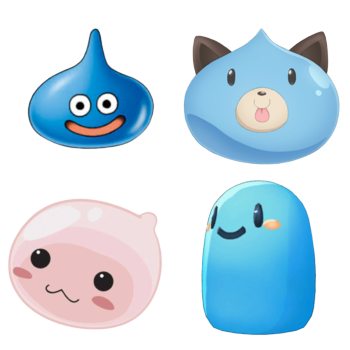 Dragon Quest I was one of the most influential video games of its time, and is partly responsible for forming the Eastern RPG as we know it. But one rather minor monster from it also made a peculiar mark on gaming: The Slime.

While the Blob Monster was a staple of tabletop RPGs before Dragon Quest, Akira Toriyama's addition of a waterdrop-shaped form and an adorable smiley face made a particularly strong impression. The slime ended up becoming a Mascot Mook for the franchise, and naturally, like many of the tropes Dragon Quest introduced, a cute, low level blob became an Eastern RPG cliche in itself.

Unlike the standard amorphous Blob Monster, a Cute Slime has a rounded form, like a drop of water on a car's hood (or maybe a gumdrop). They're also more likely to bounce or roll around than ooze. One assumes they have a much higher surface tension or thicker membrane than your typical Ooze (more like the classic Gelatinous Cube of Dungeons & Dragons fame, but not as rigidly shaped). You might also note they have a strong tendency to be colored blue, at least the first or most numerous version is. Variations may come in a variety of colors (pink/red and green being fairly common).

The Cute Slime Mook is almost always a common, weak, low-level mook, but like the ones in Dragon Quest, may come in stronger or gimmicky variants. Common variants of slimes include different colors, slimes that are harder to defeat but offer greater rewards, or even expies of the Heal Slime. Like their inspiration, they always have cute, smiling faces, or at the very least, Black Bead Eyes. These slime-lookalikes are often mascot mooks for their respective series in themselves.

If you see one of these, it's likely the work is in a Standard Japanese Fantasy Setting.

Subtrope of Blob Monster, Adorable Evil Minions and Fountain of Expies. Compare Slime Girl, which is a different kind of cute.