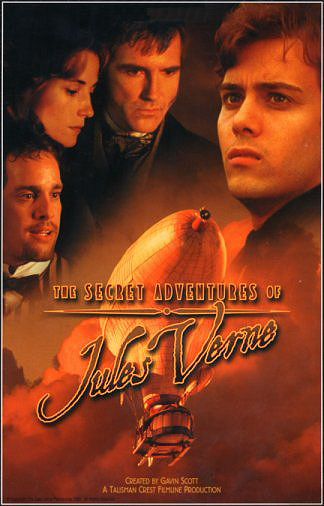 The Secret Adventures of Jules Verne is a short-lived science fiction television series belonging to the Steampunk genre that first aired in June 2000 on CBC Television in Canada and in syndication in the United States. One twenty-two episode season was made.

The main premise of the series is that Jules Verne did not imagine most of his creations but based them on his real-life experiences. He was unable to refer them straight because of their clandestine and classified nature. As a young student and struggling playwright gifted with tremendous imagination, Verne (Chris Demetral) was captured by the sinister League of Darkness and subsequently rescued by Rebecca Fogg (Francesca Hunt), an agent in the employ of British Intelligence and Phileas Fogg (Michael Praed), her cousin, technically also an agent but much more reluctant after being disillusioned by the government. Together with Phileas' valet Passepartout (Michel Coutremanche) they embark on various adventures. Determined to thwart any danger to the British Crown, they more often than not face the shadowy League of Darkness led by monstrous Count Gregory (Mike Overton).

Definitely one of the best representatives of classical among TV Series, SAoJV are chock full of steampunkish designs and imagery. Low budget props and small sets that usually represent small, confined spaces also give the series a rather distinctive, theatrical appearance.

The Secret Adventures of Jules Verne provides examples of: