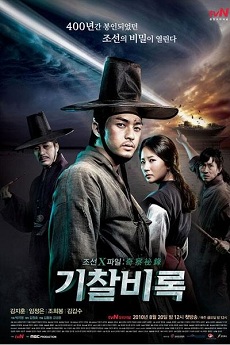 August 25, 1609. An unnatural light appears in the skies above the province Gangwon-do

, accompanied by a massive flying vessel. The sole governor who dares to report the sighting to the king is immediately arrested for treason.

Kim Hyung-do, an upright investigator, is assigned to the case. He immediately recognizes the accused governor as his former mentor. As he investigates the sighting in a desperate attempt to save his mentor from execution, Hyung-do runs into the mysterious Ji Seung, who's shadowy organization, Shin-muh-wai, is in charge of secretly investigating and recording "bizarre and mysterious incidents that nobody can explain." Ji Seung later recruits Hyung-do.

Together with his side-kick Jang Man and the enigmatic Heo Yoon-yi, the skeptical Hyung-do attempts to discover the truth behind the inexplicable events which occur in Joseon.