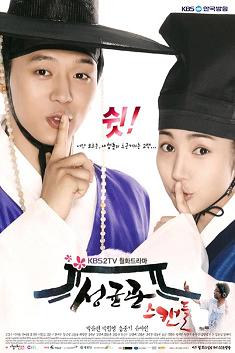 Shh! It's a secret!
Advertisement:

Sungkyunkwan Scandal (Hangul: 성균관 스캔들) is a 2010 Korean Series about a group of popular students studying at Sungkyunkwan University during the Joseon dynasty.

The main character is Kim Yoon Hee, a cross-dresser who poses as her brother in order to provide for her family. After a series of mishaps, she ends up at Sungkyunkwan where she is pulled into the politics that goes beyond the boundaries of the school. Along the way, she meets and befriends Lee Sun Joon, Gu Yong Ha, and Moon Jae Shin—each with his own political alliance.

Their alliance doesn't go unnoticed by the War Minister's son, Ha In Soo, who's determined not to let their cross-political party friendship usurp his Absurdly Powerful Student Council.