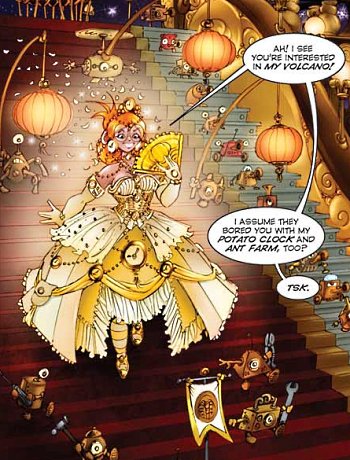 Gaslamp fantasy, also called gaslight fantasy, is Steampunk's more magically-inclined cousin. It's a subgenre of fantasy (and more specifically of Historical Fantasy) with a setting that is clearly recognizable as the real-world 19th or very early 20th century (or a reasonable analogue thereof). That's the Regency period and the Victorian and Edwardian eras, if the work's set in England, which it usually, though not necessarily, is. Victorian London is especially popular. It may be identical to the real world with a Masquerade, or it may be a full-on Alternate History where magic exists openly and has affected the course of events. Gaslamp fantasy often draws on gothic horror tropes, and is sometimes seen as a sort of Reconstruction or revival of the genre.

The term was coined to describe the comic Girl Genius (although the 1997 Encyclopedia of Fantasy had previously coined the term "Gaslight Romance" to describe something very similar), but has since come into wider use, and is sometimes retroactively applied to the more fantastical works of Gothic Horror. Girl Genius was called that because its creators wanted to avoid confusion with a comic named "Steampunk", but also because it was focused on more than just advanced steam power, was not a dystopian-type "Punk" work, despite having similar aesthetics, and is heavy on mad science.

For similar genres with more modern settings, see Urban Fantasy, Dungeon Punk and Gothic Punk. Not to be confused with Gaslighting.

For tropes common to these works, check out the Steampunk Index.