Webcomic / Next Town Over 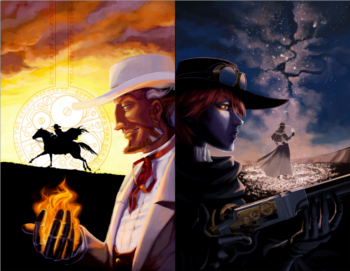 is a weekly Gaslamp Fantasy western webcomic by Erin Mehlos.

John Henry Hunter is a notorious and dangerous outlaw with pyrokinetic abilities; so infamous is he across the territories that he has a reward of $10,000 and counting on his head. He is seen in the town of Lookback taking a valuable necklace of personal significance to him from a French maid while torching the saloon they are in.

Trailing after him is the equally dangerous and mysterious Bounty Hunter Vane Black. Vane, a stone-faced woman with an eerie pallor, is an old acquaintance of Hunter's who is hunting him down for having wronged her in the past.

As they battle across the frontier, they take advantage of every object, person, or animal which might help them to achieve their goals. And neither of them seems to care much about the collateral damage they cause during their confrontations. This is not a good thing for the other inhabitants of The Wild West. (See Title Drop below.)

Why is she chasing him? And what, exactly, is he after?

The webcomic updates every Saturday. The first page is here

, and the latest is here

Next Town Over provides examples of: