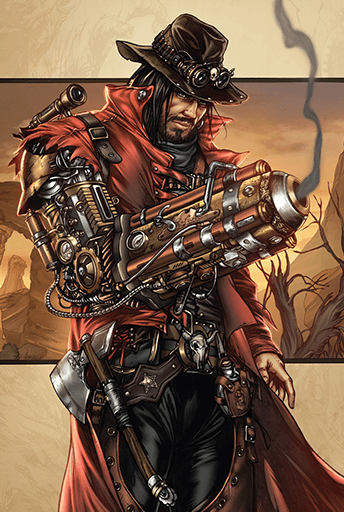 When Steampunk goes out to the Wild West.
Advertisement:

Cowboys are awesome. The Western was one of the most popular film genres from the advent of film through The '60s, and that's not to mention the books, comics, TV series, and radio. Science Fiction is at least as awesome, and even older, dating from 1608 and Kepler's Somnium. An obvious recipe for even more awesome is to mash them up.

A setting which otherwise more or less resembles your typical John Ford film will have things like robots, super-weapons, and wacky gadgets tossed in. Interestingly, the heroes of such stories are usually pretty normal considering the setting — they'll use weapons like pistols and shotguns to take down warmechs.

This kind of plot usually takes place either on another planet or in a very obvious Alternate History, since making it work on Earth seriously messes up the space time continuum.

This setting is unusual among the Punk Punk subtropes in that it actually predates Steampunk, which is generally considered the ur-trope. For this we can thank The Wild Wild West, which pioneered the genre by thinking in terms of The Western meets Spy Drama — which, in practice, ends up looking a lot like Steampunk. It is worth noting that stories in either genre tend to fit into roughly the same time period historically: between the mid 19th and early 20th centuries.

Expect ample Schizo Tech in this setting. This a bit of a variation on the IN SPACE! model, though characters here rarely ever actually go into space, at least for extended periods of time.

For the inversion, see Space Western. A related genre is the Weird West, for when the west gets a supernatural treatment.

Not to be confused with Cowpunk, a form of music combining (you guessed it!) Country and Punk, which existed mainly in the 1980s. Although a Cowpunk soundtrack would be a natural fit for a Cattle Punk movie.