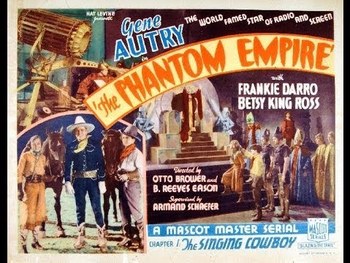 The Phantom Empire is a 1935 serial with Gene Autry as "The Singing Cowboy" who discovers an advanced underground civilization with robots and other high tech. Notable for being a mashup of the western, science-fiction and musical genres. Do not mistake it for the 1988 low-budget film of the same name.

The Phantom Empire provides examples of the following tropes: