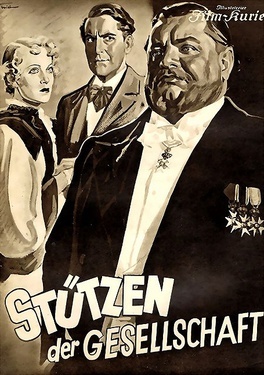 Pillars of Society (Stützen der Gesellschaft) is a 1935 film from Germany directed by Douglas Sirk, under his original name of Detlef Sierck.

It is an adaptation of Henrik Ibsen play The Pillars of Society. Karsten Bernick is a shipbuilder in Norway, a "pillar of society" in his community. He basically owns his town, a fishing village, and he's pretty highhanded about it. When a newspaper reporter writes an unflattering piece, Bernick has him fired. Worse, his expansion of the docks at his shipyard threatens to ruin the livelihoods of the fishhermen who are a large part of the village.

Bernick's little kingdom is threatened by the arrival in town of his Black Sheep brother-in-law Johann Tonnessen, who has returned home after twenty years as a rancher in America. Johann is shunned by most of the people of the village, for a couple of reasons. First, he is rumored to be the father of Dina Dorf, a lovely young lady of uncertain parentage who lives with the Bernicks. Second, he is rumored to have stolen funds from Bernick's shipping business before absconding to the States two decades ago. Karsten Bernick is the only one in town who knows the truth: he, Karsten, is Dina's father, and he, Karsten, allowed the rumor about Johann embezzling to spread in order to cover up his own business failures.