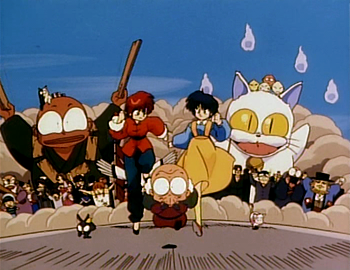 Just one of those days.
Advertisement:

When a sufficiently large group of characters or extras in a comedy Anime or Animated Series are pursuing someone angrily, they appear as a Thundering Herd covered in a noisy budget-saving cloud of dust, optionally with torsos, heads, and arms sticking out. An alternate presentation, popular in anime and manga, presents a five-story-tall cloud of people chasing the protagonist. Sufficiently wound up single characters can also appear as a one-person Thundering Herd when pursuing or fleeing in panic.

Members of a Harem or Love Dodecahedron sometimes chase the object(s) of their romantic desire down the street in a Thundering Herd. Multiply that if the character is dealing with a Groupie Brigade.

The Thundering Herd is generally accompanied by loud sound effects (rumbling, crashing, shouting, the cries of bystanders), and frequently by the Screen Shake. Sometimes it is visible only as a cloud of dust (or distinct geysers of dust) behind other scenery.

Not to be confused with the athletic program of Marshall University. A Sub-Trope of Everyone Chasing You. Compare Wheel o' Feet, Big Ball of Violence. For literal thundering herds, see Animal Stampede.