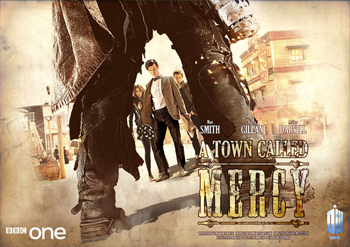 Cue the Spaghetti Western music!
"Today, I honour the victims first. His, the Master's, the Daleks', all the people who have died because of MY MERCY!"
— The Doctor
Advertisement:

The one with a transgender horse.

The Doctor, Amy and Rory walk into the middle of a Western town and say they've come from outer space. As soon as the Doctor introduces himself, the townsfolk grab him, drag him to the outskirts of the town and offer him to a Steampunk Cyborg named the Gunslinger. Isaac, the marshal, intervenes and scolds the townsfolk for going against what they already know: the alien doctor that the Gunslinger is most likely looking for is a wholly different man, safely locked up in the marshal's cell.

This (equally Steampunk) crash-landed alien, a gentleman scientist named Kahler-Jex, arrived in the town a while ago and had already settled in quite well. Isaac happily acts as his friend and protector. Mercy is a town of second chances, where people have renounced hatred, xenophobia and mob mentality. Jex befriended the townsfolk and even provided the town with electricity — albeit 10 years before its invention on Earth — from his crashed ship. But with the Gunslinger now preventing people from entering and leaving the town, it'll only be a short matter of time before everyone starves.

The Doctor thinks this is going to be a pretty straightforward adventure: distract the Gunslinger, evacuate the townsfolk into the TARDIS, fix the crashed ship and celebrate afterwards. He befriends a horse named Susan and goes off to investigate. However, the Gunslinger turns out to be a very Gentle Giant whose programming blocks him from killing innocents unless it's absolutely necessary. Meaning that Kahler-Jex is not exactly innocent at all. In fact, Jex is a war criminal, a scientist who turned innocents into cyborgs against their will and used them to commit genocide in an interstellar war. The Doctor rushes back to town and goes into a violent rage against Jex, knowing full well that he's not so different himself. They both have committed genocide in the name of ending a war, and they've both killed people directly to save the lives of others. All the Gunslinger wants is revenge for having his life taken away from him. The Doctor, furious, literally throws Jex in front of the Gunslinger and, when that isn't quick enough, pulls a gun and debates whether or not to put a bullet through Jex's head on the spot. Amy brings him back to reality. As the Doctor has a little bit of a Heroic BSoD, the Gunslinger fires and Isaac makes a Heroic Sacrifice to catch the blast. He dies in the Doctor's arms and hands him the marshal's star.

Back in his cell, Jex bitterly calls the Doctor out on his frustration at Jex not being a clear-cut villain. Jex is a genuinely nice person who just wanted to save his people and end the war, and his religious beliefs are that he'll have to carry the full burden of his actions after death (quite literally). Meanwhile, the townsfolk have formed a frightened mob and have gathered outside the sheriff's office to get Jex... using force, if they have to. They just want to protect the town's children and stop living in fear. The Doctor brings them back to reality with much the same arguments Amy used on him earlier that day, and tells them that he'll do everything he can to prevent them from having to live as murderers.

In the end, the Doctor stages a distraction and allows Jex to escape into the desert. Jex knows that the Gunslinger will follow him no matter where he goes, and since he doesn't want the lives of more innocent townspeople on any planet on his conscience, he commits Heroic Suicide. The Gunslinger, realising that he's still an immortal monster and that he can never go back home to his normal life again, heads off to do much the same. However, the Doctor convinces him to stay in the desert as the town's marshal and protector.

Once again, Amy and Rory decide to take a break from the Doctor for a while, and they head back home to their wedding anniversary.