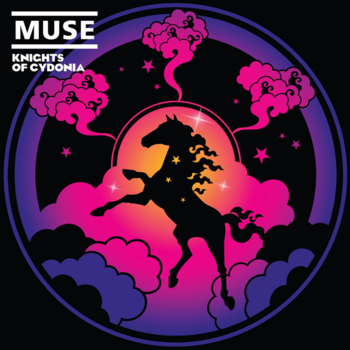 "I think this video is ultimately, in its own way, a tribute to 1980s action films. There was this really cool era of films that came out after 1979, you know, after Spielberg had come out with Jaws and Close Encounters. This is the story of the people who were trying to be George Lucas and Steven Spielberg with a tenth of the budget, and came up with the craziest, weirdest Science Fiction films. They were American movies like westerns and science fiction, but usually funded by some European arms dealer, and directed by a crazy, completely coked-out director."
— The director, Joseph Kahn, describes the video's influences
Advertisement:

" is a music video from the band Muse. The video is a six-minute Cattle Punk film, complete with beginning and ending credits.

It takes place in a Schizo Tech version of The Wild West, and includes, kung-fu, laser guns, laser blades, dirt-bikes, a few Badass Longcoats, execution by hanging, androids & robots, birds of prey, seduction, a holographic rock band, Communist imagery, and a heroine in a Chainmail Bikini on a unicorn. It ends with the hero using a CD to kill the corrupt sheriff, then riding into the sunset on a motorcycle.

Not to be confused with Tsutomu Nihei's manga series Knights of Sidonia, which has fewer cowboys and more Humongous Mecha.