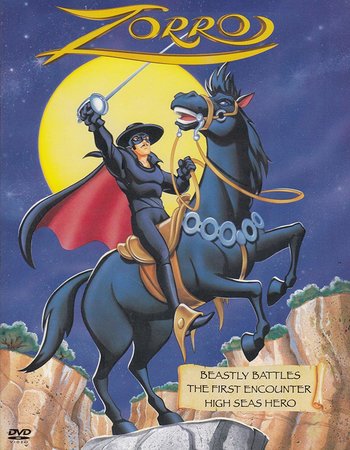 "His stallion is black as the night..."
"The thunder of a stallion's hooves, the crack of a bullwhip and the steely slash of a sword in the night. In a blinding flash of blackness he neutralizes those who would perpetrate injustice, leaving only the unmistakable mark of a "Z" behind — the "Z" for Zorro!"
— DVD
Advertisement:

The New Adventures of Zorro is a Warner Bros. Saturday Morning Cartoon from the Zorro franchise. It premiered on Kids' WB! on September 20, 1997 and it lasted two seasons with 26 total episodes before it ended on December 12, 1998. Reruns continued on Cartoon Network. The show is rather similar to Batman: The Animated Series and Superman: The Animated Series, which were made around the same time.

Zorro battles corrupt tyrannical enemies who use steampunk technology or supernatural powers. The main antagonist is Captain Montecero, who wants to bring Zorro to justice with the help of his unlucky bumbling servant Sergeant Garcia and the rest of his Los Angeles troops. When Zorro defeats his enemies, he leaves behind the sign of a "Z" to inform everyone of his presence while being secretive about his real identity.

You might have been looking for the unrelated 1981 show.

"Out in This Very Wiki, Zorro's story is troped..."