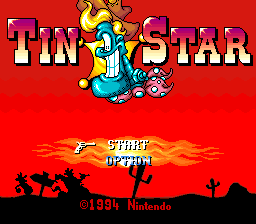 A Rail Shooter by Software Creations for the Super Nintendo Entertainment System in 1994. You play Cowboy Robot Sheriff Tin Star as he sets out to bring justice to the Ol' West town of East Driftwood. Mere moments after arriving in town he runs afoul of the Bad Oil Gang and their leader Black Bart, and is tasked with bringing them down within the space of a week. Pretty much a typical western tale, but with robots.

Not to be confused with the similarly-named Story Branching game.