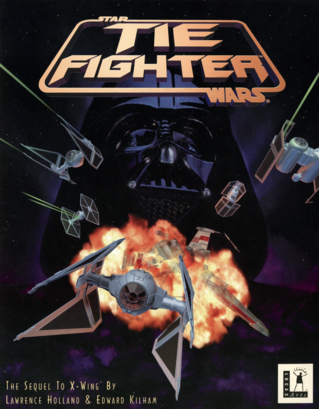 Good hunting, Alpha 1!
At the battle of Yavin
Rebel terrorists, aided by
spies and traitors within the
Empire, struck a cowardly
blow at the new symbol of
Imperial power... The Death Star!

Darth Vader brought swift justice
to the Rebels by destroying their
main base on Hoth. The pitiful
remnants of the Alliance have
now scattered to the Outer Rim.

In the days ahead, the Emperor
will call upon the Imperial Navy
to eradicate the last vestiges
of rebellion and restore law
and order to the galaxy!
Advertisement:

TIE Fighter is a Star Wars Legends PC game first launched in 1994, with various expansion packs and collector's editions being released as late as 1997.

The history of the game itself goes back to the early 1990s, when LucasArts approached game developer Lawrence Holland and his studio, Totally Games!, to develop a series of games for the publisher. The first games were actually WWII flight simulators including Battlehawks 1942 and perhaps Holland's best known non-franchise game, Secret Weapons of the Luftwaffe. These games became instant classics, and in the meantime Holland was working on a 3D rendering engine specifically for flight sims, something that back in 1992 was revolutionary.

This prompted LucasArts and Holland to develop a flight (or rather space) sim game using both this engine and the Star Wars license, and X-Wing was the result. A year later, Holland got working on a sequel. Rather than being a direct sequel chronicling the Rebel Alliance and their starfighter squadrons after the Battle of Hoth (which is where X-Wing left off), the game would put the pilot in the ranks of the Rebel's greatest enemies, the Galactic Empire, by putting them in the seat of one of the Empire's greatest symbols of military might, the TIE Fighter.

The main protagonist of TIE Fighter was Maarek Stele (though he was never named as such in the game; his name comes from the supplemental guidebook that came with first run editions of the game) who started out as an anonymous pilot but would rise through the ranks with distinction over the course of the game's events. What separated TIE Fighter from X-Wing in particular was its rather involving story and campaign, which not only pitted the player against the Rebels (and certain traitorous Imperials) but also explained the motivations behind the actions of the Empire and its enemies and gave significant insight into many key characters of the Star Wars universe, including Thrawn (a major story thread of the game is how Thrawn was promoted from Vice Admiral to Grand Admiral). The game also presented optional "secondary" mission goals which, when completed, would earn the player additional rank.

Since flying around in an unshielded TIE Fighter when the other guys have much faster and better shielded craft wasn't much fun, the game also introduced a number of new craft for the Imperials to fly around in. The "Assault Gunboat," invented for X-Wing to give the player a more challenging foe, was reintroduced in TIE Fighter to provide him with a craft that actually could be able to attack capital ships without dying all the time. Also introduced was the "TIE Advanced" note Which was later re-named the TIE Avenger after later Legends material directly contradicted the game which was an improved production version of Darth Vader's special TIE variant from A New Hope (it also had shields and a hyperdrive like the Assault Gunboat), the TIE Defender (a starfighter which pretty much defines the term "broken") and the Missile Boat (which manages to outdo even the TIE Defender in terms of being broken - you can take out entire fleets with one. And it is awesome).note  It's implied in-game that the main limitation on starfighters is cost, with the Defender being staggeringly expensive, and the Missile Boat—designed particularly to hunt and kill TIE Defenders—being even more staggeringly, obscenely expensive. Unfortunately, Truth in Television: Often in wars the cheapest weapon is the most common even if better ones are available.

Another notable feature of the original issue was the "iMuse" system (no, it doesn't have anything to do with iMacs or iPods) which dynamically changed the background music based upon the player's actions. The background music itself was notable for being comprised of original scores by the Totally Games! crew. Sadly, the iMuse feature was dropped in the X-Wing Collector Series box-set rerelease, replaced by high-fidelity scores from the original trilogy, though the soundtrack's still quite good.

The market life of this game was extended numerous times through various expansions and "collector's editions." This was particularly annoying as LucasArts and Totally Games! clearly anticipated expansion packs from the beginning, since they left the campaign story of the original release of the game incomplete. The first expansion, "Defender of the Empire" added the TIE Defender and its associated campaign missions - by the way, even after installing Defender of the Empire, many players were annoyed when it was found that they still left the campaign story incomplete. The final "expansion pack" was abandoned in favor of releasing the "Collector's CD" edition in 1995 which not only (finally) included a finished campaign story, but upped the in-game resolution to 640x480 (though no changes were made to the graphics engine itself) as well as updated speech and voice acting. Of course, understandably, original purchasers of the first game were annoyed since in order to actually complete the campaign, they had to buy the game all over again. And then they had the nerve to rerelease it again in the X-Wing Collector Series, this time stripping it of the iMuse music technology in favour of the Williams scores. Fortunately all was forgiven because in the end, TIE Fighter turned out to be just that damn good.

Despite its age, you'll still see this game often in top 5 lists of best Star Wars games ever, and often across other related "best of" lists too. It is available to buy on GOG.com and Steam.

All the cutscenes have been collected here.