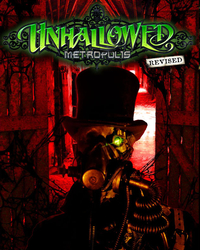 A rather bleak Tabletop Roleplaying Game set in a dystopian future, Unhallowed Metropolis presents a world where history departed from ours in a rather dramatic fashion. In December of 1905, human civilisation almost ended. Across the world, the dead began to rise and feast upon the flesh of the living. A years-long war followed, in which survivors desperately fought at first for mere survival, and later to reclaim the zombie-infested cities. Eventually, the more powerful nations of the time managed to return to something resembling a stable society, with large numbers of humans crammed into fortified cities while Animates (the 'scientific' term for zombies) prowled the Blighted countryside.

Skip forward two centuries to the year 2105 and things aren't much better. The game focuses primarily on what's going on in London, and portrays an exceptionally grim view of life in a post-apocalyptic metropolis. The Plague which gave rise to the animate hordes has mutated, producing various undead monstrosities. Bloodthirsty vampires and human psychopaths have come crawling out of the woodwork to prey upon the faceless masses. Many of mankind's attempts to fight or harness the Plague have backfired spectacularly, though they have also resulted in some unexpected and rather awesome advances in the fields of medicine, alchemy and galvanics.