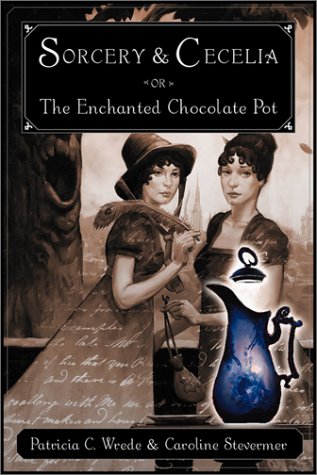 Magical intrigue, murderous plots, and matching gloves.
Sorcery & Cecelia (or, to give it its full title, Sorcery & Cecelia or The Enchanted Chocolate Pot: Being the Correspondence of Two Young Ladies of Quality Regarding Various Magical Scandals in London and the Country) is a Historical Fantasy novel by Caroline Stevermer and Patricia C. Wrede, set in an Alternate History version of Regency England with wizards. It is an Epistolary Novel, consisting of the letters written by Cecelia to her cousin Kate and Kate's letters to Cecelia.
Advertisement:

Kate is in London being overshadowed by her socially adept and flighty younger sister, and becomes entangled in a feud between the mysterious Marquis of Schofield and the even more mysterious Miranda, who is probably a sorceress. Cecelia is initially chagrined to be stuck at home in Essex, but soon finds plenty to occupy herself, some of which turns out to have a bearing on Kate's problems in London.

Sorcery and Cecelia was originally published in 1988. It was brought back into print in 2003, followed by two newly written sequels, known in the short form as The Grand Tour and The Mislaid Magician.

Stevermer has also written a solo children's novel in the same setting, Magic Below Stairs, set in the Marquis of Schofield's servants' quarters.

Sorcery and Cecelia and its sequels provide examples of: