Literature / A Study in Emerald 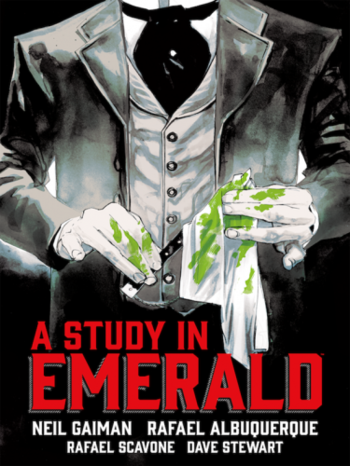 "A Study in Emerald" is a Hugo Award-winning short story by Neil Gaiman, essentially an Intercontinuity Crossover between Sherlock Holmes and the works of H. P. Lovecraft. Originally it was published in Shadows Over Baker Street (2003), an entire anthology of Sherlock Holmes pastiches set in the backdrop of Lovecraft's Cthulhu Mythos. Later it was republished in Gaiman's anthology, Fragile Things (2006).

Written in the style of a classic Holmes pastiche, this story (roughly following the plot of the first Holmes novel A Study in Scarlet) finds a British soldier invalided home after being injured in a war in Afghanistan. Through a mutual acquaintance he becomes flatmates with a brilliant if unorthodox consulting detective. One day they are called by Inspector Lestrade to assist with investigating the gruesome murder of a member of the Royal Family. A member who is both far more and far less than human...

for free, in nifty newsprint format in the style of an old Victorian Penny Dreadful. Which we highly recommend you do before proceeding to the trope list, which contains spoilers.

And also just because it's awesome.

A Board Game was released in 2013 by Treefrog Games