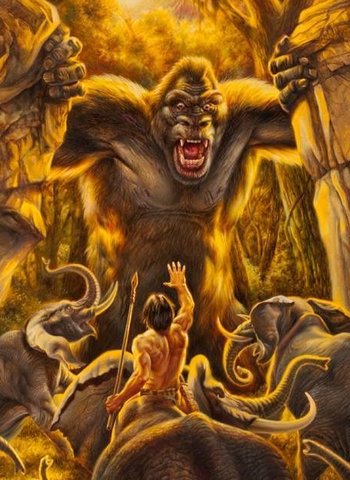 Due to an accident at sea, the comatose King Kong breaks free of his bindings in the ship taking him from Skull Island to New York and manages to make it ashore to Darkest Africa. Naturally a 10 meter tall predatory ape doesn't go unnoticed even before the ship's crew makes it to shore to chase after him. Battling and devouring numerous African fauna, word eventually reaches the Waziri lands and the ear of someone Denham had met before, Lord Greystoke. Already privy to bizarre prehistoric monsters and needing to protect his wife and Waziri allies, Tarzan sets out to stop Kong's ravenous, confused rampage.

A 2016 crossover novel by Will Murray in which the Lord of the Apes crossed paths and comes to clash with the King of Skull Island. Set in a shared continuity with both the original Edgar Rice Burroughs Tarzan novels and the Joe DeVito Kong series, the crossover was made with the permission of both the Cooper and Burroughs estates.