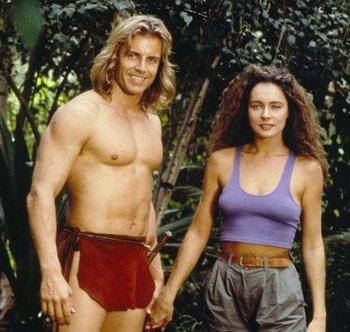 Tarzan and Jane
Tarzán is a French-Canadian-Mexican series that ran from 1991 to 1994, based on Edgar Rice Burroughs' Tarzan. The series was created for the syndication market and produced 75 episodes over 3 seasons. The show starred Wolf Larson as Tarzan and Lydie Denier as Jane, as the two deal with the day-to-day adventures of the jungle.

Not to be confused with the 1996-1968 series of the same name. See the other TV series based on Tarzan: Tarzan: The Epic Adventures and The Legend of Tarzan.