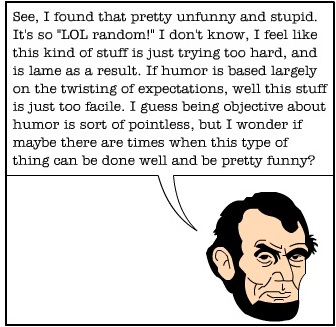 A bunch of heads of deceased historical figures gather to discuss their thoughts on life, have crazy misadventures, and just generally get into hijinks. Abraham Lincoln serves as the strip's protagonist and serves up most of the topics and philosophy such as “Batman is not gay”

, “The goal of all relationships is to get maximum smooches”

Lincoln is joined by a plethora of other characters, some are contemporaries of his time, others are also former presidents, some are simply historical figures of note, some are aquatic gods created just for the comic. A partial list can be found here

There’s little in the way of plot and most comics are devoted to Lincoln’s observations on life, which don’t necessarily come off as “well thought out.” The other characters tend to take turns being his foil by pointing out the flaws in thinking or just by being more knowledgeable than Lincoln. This never stops him from “Thinkin’” as it were…

Nevertheless, the occasional story arc and developments do come up and there are a few official couples in the comic. There have been deaths, though as Lincoln puts it “I guess they ARE dead, but they were like that when I found them!”

after the two murdered characters are show happily greeting the reader in the panel before. Definitely a comic where Rule of Funny rules supreme with a little help from its friend, Rule of Cool.