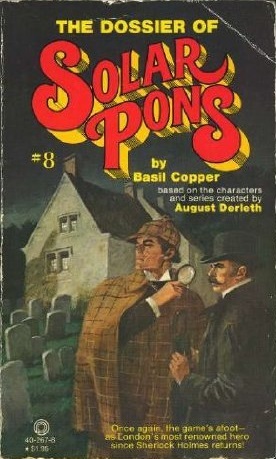 After publication of The Case-Book of Sherlock Holmes in 1927, Arthur Conan Doyle stated flatly that there would be no more Sherlock Holmes stories, period the end. After waiting a year to see (Doyle had said such things at other times), the young August Derleth, then but a college freshman, wrote Doyle a letter asking whether, if it were indeed so that Holmes' career was over, Derleth could publish pastiche tales, though not purporting to be actual Holmes stories. Doyle, it seems, gave the project his blessing, and so was born Solar Pons.

In the event, the series continued at irregular intervals for over four decades, and is widely considered the most successful Holmesian pastiche of all the many. Pons is not exactly just Sherlock Holmes with the serial number filed off; he exists in the same world as Holmes (by then retired), to whom he occasionally refers (though not by name) as The Master. As Holmes entered the world at the tail of the Second Afghan War and exited it on the eve of World War I, Pons enters it at the end of WWI and exits it on the eve of World War II.

The parallels are many and overt: Solar Pons himself; his companion and amanuensis Dr. Lyndon Parker; their shared bachelor quarters at Number 7B Praed Street (which lies about a half mile east of 221 Baker Street), with long-suffering but faithful landlady Mrs. Johnson; his even more acute but lazy and unclubbable elder brother Bancroft, who is a shadowy but high figure in the British government; a small assortment of semi-incompetent but grudgingly admiring Scotland Yard inspectors (notably Inspector Jamison); a ragtag collection of street urchins, whom he calls "The Praed Street Irregulars", who do spying chores for him, led by the cheeky Alfred Peake; and even an evil mastermind, though of espionage, not crime per se, Baron Ennesfred Kroll, the German spymaster.

The tales in the Pontine canon (as the collected works are known) can be broadly divided into two classes, the straight and the humorous, the straight being more or less straightforward tales of detection in the classic Holmesian mode, while the others—a minority—have some gentle fun, most notably by involving fictional characters from outside either canon (most notably Dr. Fu Manchu, who recurs); perhaps the most outstanding example is "The Adventure of the Orient Express", in which we encounter, among others, very thinly disguised versions of Ashenden, Hercule Poirot, and The Saint.

Several of the Pontine tales have titles taken from the famous "unrecorded" cases of Holmes which Watson often alluded to, including the matters of of Ricoletti of the club foot (and his abominable wife), the aluminium crutch, the Black Cardinal, and that of the politician, the lighthouse, and the trained cormorant. Others of the canon are riffs on Holmesian tales, such as "The Adventure of the Tottenham Werewolf" paralleling (in some ways) Holmes' case of the Sussex Vampire.

There is a dedicated Pontine web site, Praed Street

, that even went so far as to produce a brand new Pons novel in 2008

. Other Pontine pages of interest include the Solar Pons

article at that other wiki, and a concise bibliography

of the canon, which includes more stories than Doyle ever wrote about Holmes (all are short stories save one novel, Mr. Fairlie's Final Journey).

The canonical tales have been augmented by a carry-on series penned by Basil Copper, now up to several books' worth. Copper also edited a 1982 two-volume omnibus collection of the canon, published by Arkham House, a publishing firm founded by Derleth himself and chiefly publishing weird fiction (such as Cthulhu-mythos tales); in that edition, Copper "edited" most of the tales in ways that many Pontine aficionados found objectionable. A later omnibus, The Original Text Solar Pons Omnibus Edition, was issued in 2000 under the imprint of Mycroft & Moran (a name which is itself a Holmesian jest); ironically, Mycroft & Moran was long a subsidiary of Arkham House (but is no longer so).