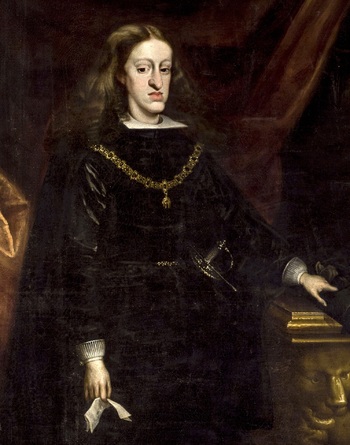 Carlos II "The Hexed" of Spain

. Most people have family trees. This guy had a family tumbleweed. Yes, his lower jaw really did jut out that far, and yes his nose really was that messed up. Also, this is a flattering portrait.
"Madness and greatness are two sides of the same coin. Every time a new Targaryen is born, the gods toss that coin into the air and the world holds its breath to see how it will land."
— Barristan the Bold, A Song of Ice and Fire
Advertisement:

Nearly every family of a decent size has at least one relative who's a little... strange. Maybe it's Great-Aunt Enid and her collection of carefully mounted cat skeletons (no one knows where she gets them—they just appear), or second cousin Dolf's extensive research library on famous serial killers, complete with memorabilia he buys off of eBay at outrageous prices. (Those clown paintings he adores are particularly creepy.)

This isn't much of a problem, usually, as long as one is careful not to get cornered by them at family reunions. But, what happens when your family are hereditary rulers of some kind?

Kings, Emperors, High Priests, whatever you want to call it, the point is you have great power. Power that belongs to your family, and your family alone. Power that somehow meets Crazy. Due to random chance or, sometimes, not-even-remotely-random, deliberate action, Great-Aunt Enid or second-cousin Dolf will end up with the royal prerogatives.

What follows is either a reign of grotesque excess, blood, and terror, or some other form of epically bad king or queen. Rarely, you'll actually get somebody so bonkers and out there, they actually work well enough for their... little quirks (they're just paintings, for crying out loud!) to be ignorable. Eventually, however, our "At Least Painting the Throne-Room Puce and Yellow Worked" King Dolf or "Perhaps We Should Have Looked Into Those Cats More" Queen Enid will leave the throne (or be made to leave)... That should be the end of this outbreak of eccentricity, right?

Not necessarily. In fact, not even probably. Potentially dangerous insanity in the ruling line rarely appears in a single, isolated case when it comes to fiction. Nope. Chances are the whole family line is just as affected somehow, which means that sooner or later — probably sooner — along will come Queen Enid II and King Dolf III both or either of whom is painfully, obviously off their rocker enough for people to openly comment... And, the whole thing will start up all over again.

This may continue for a good many decades or even centuries, with each new generation crossing its fingers that they get one of the "good" rulers from the line and not one of the "iffy" bunch. If you are unfortunate enough to get stuck with one of the blood-drenched loonies, one common solution is to go find someone else from the same family who didn't get hit with the Ax-Crazy stick and put them on the throne instead of poor Enid or Dolf before revolution breaks out. This is where disgraced half-brothers, exiled princes/princesses and unknown sons/daughters come into play. Unless something permanent is done about the family problem, however, this is most likely just a temporary solution. Give it a generation or three of this side-branch inheriting, and it'll be back to our regular Queen Enid "Tree-Whisperer (and Agricultural Reformer)" IV and King Dolf "Bloody Insane" VI programming.

In fiction there are several common reasons why a royal family might be prone to madness.

Whatever the reason, your rulers are regularly certifiably bonkers (with the likely accompaniment of minor and/or major physical deformities, because physical goes together with mental like salt does with pepper), at least as far as objective outside observers are concerned.

Note that royal/imperial insanity is Truth in Television often enough that it can be a bit frightening.

The Caligula is a singular example of this trope, leaving out the familial tendencies, although they arguably applied to him too. In the Blood doesn't apply only to royals, but is one of the many reasons why a royal family can have recurring madness problems.