Manhwa / Cavalier of the Abyss 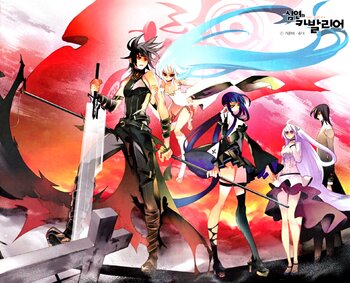 more darker than the original
Cavalier of the Abyss is the sequel series to Immortal Regis by creator Ga On-Bi. The story returns to that of the mystical world of Chaos but brings in a new protagonist, the rash revenge-driven undead named Xix against the brutal Immortal Regis of Chaos, Nex, who was once known as Jae Hyuk. Meanwhile various factions of the Regis' court and outside forces seem to be attempting to moves around the same time as Xix attempts assassinating Nex.
Advertisement:

What happened in the past to make Chaos and Nex this way? Who or what is Xix and the origin of his mysterious abilities? What is the Clan of Night that wants to see Caladbolg unsealed?

Tropes found in Cavalier of the Abyss: