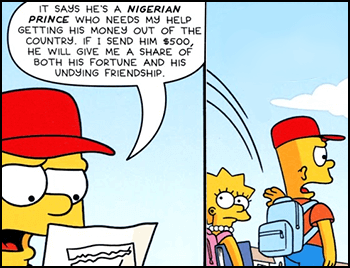 An uncommon case of Bart applying some common sense.Meanwhile... 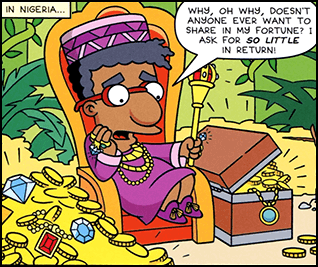 "Got message number 419
This lucky day is mine, all mine"
— MC Frontalot
Advertisement:

The advance fee fraud, known colloquially as the 419 scam, is a form of Internet fraud commonly associated with Nigeria (hence its alternative name, the Nigerian scam). The character is contacted by someone who claims (in suspiciously shaky English) to have a large sum of money which is rightfully his but which he cannot access for various reasons (sealed account, locked trust fund, etc.), and he needs the mark's help to be able to access it. If he helps out, he'll get a substantial share of the money, which could be millions of dollars. To do this, the scammer typically needs the mark's own bank account to help him transfer the money, and he needs some of the mark's own money in advance to help authorize the transfer, bribe officials, or do anything else the scammer can think of. But the money doesn't exist; once the scammer gets the mark's money or access to his bank account, he cuts off all contact. It's basically the "Spanish Prisoner" scam for the Internet age.

As a trope, though, it's not usually used as a way to drive the overall plot like the Spanish Prisoner scam is; instead, it usually goes to show how stupid or gullible a character is for falling for it. The subversion would thus take the form of the money being real and the other characters being the fools for being too cynical to help out a poor Nigerian prince. A particularly clever character might become a "scambaiter", who pretends to fall for the scam and strings the scammer along until he gets him into a humiliating or compromising situation.

In Real Life, the term "419 scam" derives from Section 419 of the Nigerian Criminal Code

, which prohibits fraud and details the punishments and penalties that await fraudsters. However, it's used to refer to all scams of this kind, even when they don't involve Nigeria or bank accounts at all. The Real Life workings of this trope are explained in greater detail on the Analysis page. But to be a trope, it helps to use shorthand, and that's why it nearly always involves a Nigerian with a big bank account he can't access. This Nigerian is also often a prince, even though Nigeria is a republic and not a monarchy (not that the mark would be expected to know this), although it does have traditional ceremonial "princes"

(not that the mark would be expected to know that either).

Compare Clickbait Gag, a trope that parodies a later manipulative internet tactic meant to make money off of people's gullibility.

Re: Prince of Nigeria

A teenage girl, Horai Owen, replies to a 419 Scam e-mail from a "Nigerian prince." But far from wanting the money, she is interested only in the romantic possibilities communicating with a Nigerian prince has to offer.

Re: Prince of Nigeria

A teenage girl, Horai Owen, replies to a 419 Scam e-mail from a "Nigerian prince." But far from wanting the money, she is interested only in the romantic possibilities communicating with a Nigerian prince has to offer.