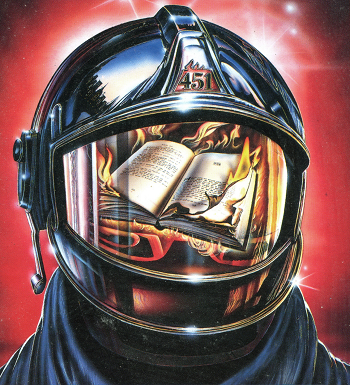 "Someone in this town
Is trying to burn the playhouse down
They want to stop the ones who want
A rock to wind a string around
But everybody wants a rock
To wind a piece of string around."
— They Might Be Giants, "We Want a Rock"
Advertisement:

Art has always been an outlet of dissension. These days, this reputation is most strongly associated with The Power of Rock. And where you get dissension, you get people trying to stamp it out. That's where the Culture Police come in.

The Culture Police are bad guys who try to stamp out art (most commonly rock and pop music and/or dancing) for whatever reason. Mundane versions may simply be exaggerated versions of real-life Moral Guardians operating on a local level, or trying to drum up support to expand their pro-censorship campaign. Fantastic versions may be a SPECTRE-esque organization or Scary Dogmatic Aliens whose scheme to Take Over the World involves stamping out freedom of expression. The fantastic variety will usually come with armies of Faceless Goons who go around confiscating or destroying books/records/paintings/what have you, and arresting (or killing) people who so much as whistle. The canonical alignment for these bad guys is Lawful Evil, as they are very much control freaks.

Can easily be perceived as a Take That! against any art deliberately allowed by the Culture Police.

Unfortunately, this trope is Truth in Television. Several authoritarian, totalitarian and/or theocratic regimes have had (and have still) cultural or religious polices whose function is to curb the dissidents and guard the morals. Let's say they do exist, and any specific examples are therefore redundant.