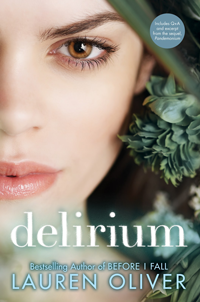 This is a series of Young Adult Dystopian novels by Lauren Oliver, author of Before I Fall. The first book was published in January 2011, and the sequel, Pandemonium, was released on February 28, 2012. The third and final book, Requiem, was released in Spring 2013.

Then there's the Protagonist Title stories, and the Book of Ssh.

The story is set 20 Minutes into the Future, in a version of America where love has been officially diagnosed as a mental illness, amor deliria nervosa, and every citizen is "cured" by an operation at the age of eighteen. Lena Haloway is eager for the procedure, having even more reason to be afraid of love than the average citizen, but then of course she meets a handsome young man — can you see where this is going?

The series was made into a film starring Emma Roberts which was made available on Hulu in June 2014.