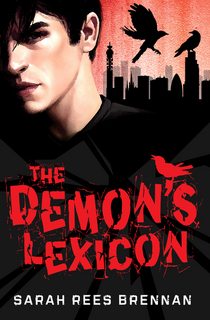 In two worlds, there is nothing I love half as much as you.
Advertisement:

In modern-day England, brothers Nick and Alan try to live a normal life. They get jobs, Nick goes to school (at Alan's insistence), Alan has crushes on girls (and girls have crushes on Nick).

Of course, Nick starts right off rescuing his favorite sword from under the sink (and don't think he won't use it), Alan could shoot you before you realized that sweet, smiling guy even knew what a gun was, they've got to watch out for mad Mum in the attic, and they're forced to pack up and move every time a magician or demon bursts into their house. Which is once every couple of months. At best.

Enter Jamie and Mae, a brother-sister duo who witness the latest demonic intrusion and need Nick and Alan's help: Jamie's been marked by a demon, a mark that lets a demon trace, hurt, and eventually possess him, leaving nothing of him behind. Alan wants to help them; Nick wants them out of his house. Naturally, brotherly arguments ensue.

Between running from, beating up, capturing, killing, and attempting to outmaneuver scheming magicians, of course.