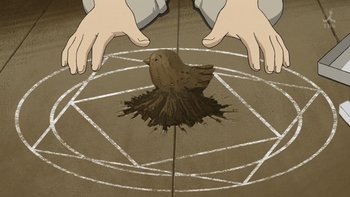 Special powers that, somehow, rely on the power of traced shapes and diagrams to function. Almost always a circular design, with additional shapes of varying complexity inside the circle. Sometimes only required for a special ceremony, sometimes necessary for anything and everything remotely magical. Only very rarely will the mechanism for how the symbols affect the magic be explained.

A form of Hermetic Magic. Geometric Magic usually sets itself up as a type of Functional Magic, frequently paired with Ritual Magic. When the magic seems to spawn the shapes rather than the other way around, it's Instant Runes. Instant Runes are generally involved anyway as the activation of the shape may cause writing to appear.

A Symbol Drawing Interface is a way to put this in a video game. Mystical City Planning is when architect spellcasters hide a giant spell in the shape of a location.

Luz casts a spell for the first time by replicating a geometric pattern in the spell circle.

Luz casts a spell for the first time by replicating a geometric pattern in the spell circle.