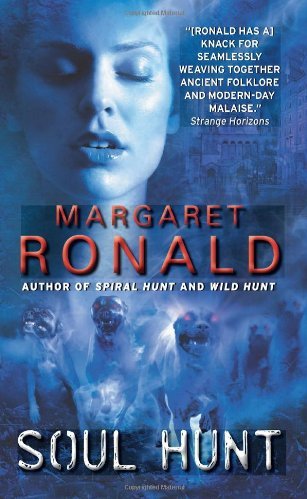 Evie Scelan novels are a series of three Urban Fantasy novels in progress about by Margaret Ronald. The title character is a bike courier whenever she gets called into work, private investigator with a specialty in finding things the rest of the time. She is known among the undercurrent as Hound, because of her uncanny ability to track anything by its scent (or, in the case of magic, a close analogue thereof).
Advertisement:

The first novel, Spiral Hunt, follows Evie after she gets a late-night phone call from a former lover. He is trying to tell her goodbye, while a mysterious other voice is giving her a warning. When he goes missing shortly after making the call, she tried to find him and help him escape the city. In the meantime, a friend who owns an occult items shop asks her to locate magical stones, and a cop calls her in to consult on a mysterious murder. Evie must find out how these things are related, and whether she can stop what's going on in the city before everyone she cares about is pulled into it.

Wild Hunt, the sequel, picks up six weeks later. Evie if offered a job tracking down the owner of sole stolen property by a woman who makes a down payment in gemstones. She can't call on her contact with the police, who is on the biggest case of her life, or one of her best friends, who she doesn't want to full further into the undercurrent. Evie also gets two offers to help organize the remaining Hub mages into a coherent group in the wake of the end of the Bright Brotherhood - one friend wants to set up a sort of communtiy watch among the normally paranoid adepts, while a mysterious stranger offers to help her organize them into a cult with her as the leader. When you take down the guy at the top, you become the guy at the top, and as much as Evie wants to deny it, the prospect is intriguing.

The third installment, Soul Hunt, was released late in 2010.