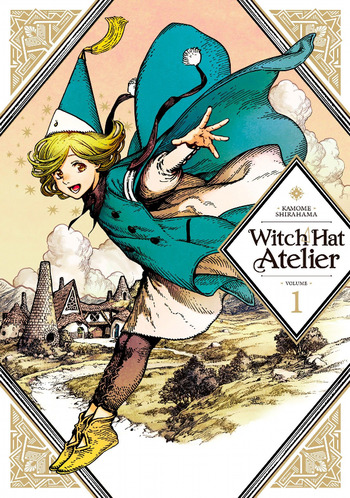 "Magic is amazing!"
"Are athletes athletes from the moment they're born? What about astronauts or idols? These things aren't decided at birth. So then... what about witches?"
Advertisement:

Witch Hat Atelier (Tongari Booshi no Atorie in Japanese, Atelier of Witch Hat in German and Spanish publications) is a fantasy manga by Shirahama Kamome.

Ever since the day a mysterious witch sold her a picture book detailing the wonders of magic, seamstress's daughter Coco has loved magic and wished to become a witch. Unfortunately for Coco, everyone knows witches are born, not taught. Coco is resigned to a magic-less life until the fateful day when the witch Qifrey visits her mother's shop. Secretly observing as Qifrey magically repairs a flying chariot, Coco watches in awe as he casts his spells by drawing glyphs. Trying to replicate the effect, Coco turns to the magical picture book. When she copies down the glyphs in the book, Coco finds that even she is able to perform magic — until her attempts backfire disastrously, nearly destroying her home and turning her mother to stone. Rescued from her uncontrollable spell at the last minute by Qifrey, Coco is given a choice: she can let Qifrey erase her memories of magic, or join him as his apprentice and learn how to reverse the spell that trapped her mother.

Coco is swept up into a world of magic she could only have dreamed of before, but her troubles are far from over and the danger is far from past. Can Coco learn to harness the power of magic and prove herself a capable witch? Does Qifrey have an alternate motive for allowing Coco to join his atelier as an apprentice? And who is the mysterious witch who sold Coco a book of dangerous magic?

Kodansha Comics began publication of their English translation in 2019.

A spin-off called Kitchen of Witch Hat started publication in 2019.

On April 5 2022, Shirahama herself announced that an anime adaptation is now in the works.