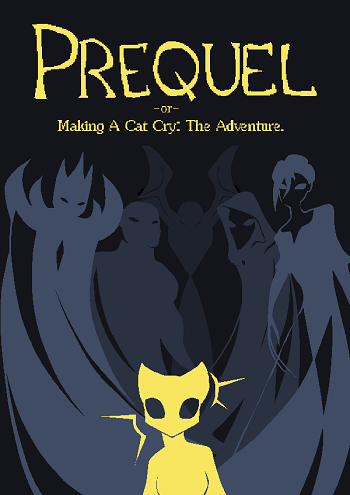 PREQUEL, or Making A Cat Cry: The Adventure* ... or Everything Is A Federal Fucking Issue And Also Trying To Make You Miserable, or Katia Managan: Alcoholic, Vasilikphobe, Adventurer, or Slutcat Adventures 2: Daggerfall is an Interactive Comic in the style of MS Paint Adventures, written and illustrated by Kazerad with various artistic collaborators. It is primarily based on The Elder Scrolls IV: Oblivion, beginning roughly two or three weeks before the events of the game's story.

The comic follows a poor young Khajiit from the province of Hammerfell who decides to start her life anew in Cyrodiil. After giving herself a new name — Katia Managan — she becomes determined to leave her old self behind. Katia is quickly faced with the same problems she left behind, though: she has no money, no trade skills, no friends, recurring night terrors, a crippling phobia of nobles and royalty, and is still recovering from a severe alcohol addiction.

Although her efforts to do better initially seem doomed to failure, she quickly befriends Quill-Weave, an Argonian writer who takes pity on her and asks her to take a letter to a friend in another town. Katia fares no better than before, but Quill-Weave refuses to give up on Katia, and it begins to look like the Khajiit might leave her problems behind her — but at every step, events conspire to drive her back to her old habits, to the point that her "bad luck" starts to seem like divine intervention...

The story was originally hosted on the MSPA forums, but now has its own website

Due to the nature of the comic and its story, this page may contain unmarked spoilers for Oblivion.