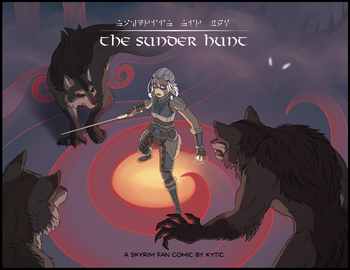 Our protagonist in the wolves' den, so to speak
Advertisement:

is a Skyrim fan comic created by Kytic

. First published in May of 2021, according to the artist the first chapter was originally penned in 2014, art and all. Pages are currently being posted on Mondays and Thursdays until the end of November in honor of Skyrim's 10th Anniversary.

The story follows the would-be Dragonborn, who is not a seasoned warrior but rather a healer, and while quite courageous she's otherwise inexperienced and reckless. Determined to meet destiny head on as best she can the Dragonborn seeks out and joins the Companions, hoping to hone her swordsmanship with their guidance (much to the chagrin of Vilkas). Unfortunately for all involved the Companions so happen to harbor a divisive dark secret and recklessness and secrets don't mix particularly well.

The main site for the comic is hosted by ComicFury but it can also be read on Kytic's DeviantArt. A mobile version of the comic was also published on Webtoon Canvas and can be found here