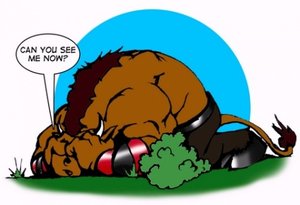 Have you ever seen a stealthy minotaur assassin? Of course not... they're just THAT good at hiding!
"I know what you're thinking! 'Gogron, he's too big to be sneaky!' Well, you're right! Me, I like to just go in and hack my targets to pieces."
— Gogron gro-Bolmog of the Dark Brotherhood, The Elder Scrolls IV: Oblivion
Advertisement:

A character in an otherwise typical fantasy game/story whose profession seems at odds with their nature or appearance as assumed by tradition or the audience, like a dwarven ranger or an ogre engineer. Sometimes this is for sheer game balance and variety, while other times it's lampshaded as being appropriate if seen in the right light. After all, even if Hobbits don't make the best warriors, that doesn't mean Hobbit warriors don't exist. Somebody's gotta protect the Hobbit village, right? Likewise, with the forests you find above and around the Dwarves' mountain halls, it makes sense to have a few guys who know their way around them. As the D&D Player's Guide points out - people become adventurers because they didn't fit their society.

Occasionally this is the reason the Plucky Comic Relief seems so inept; their interests are just utterly out of step with their natural aptitudes.

Compare Stereotype Flip, Power Stereotype Flip, Oxymoronic Being, and My Species Doth Protest Too Much. May stem from Klingon Scientists Get No Respect. Get a couple of these together and you get a Rag Tag Band Of Misfits.